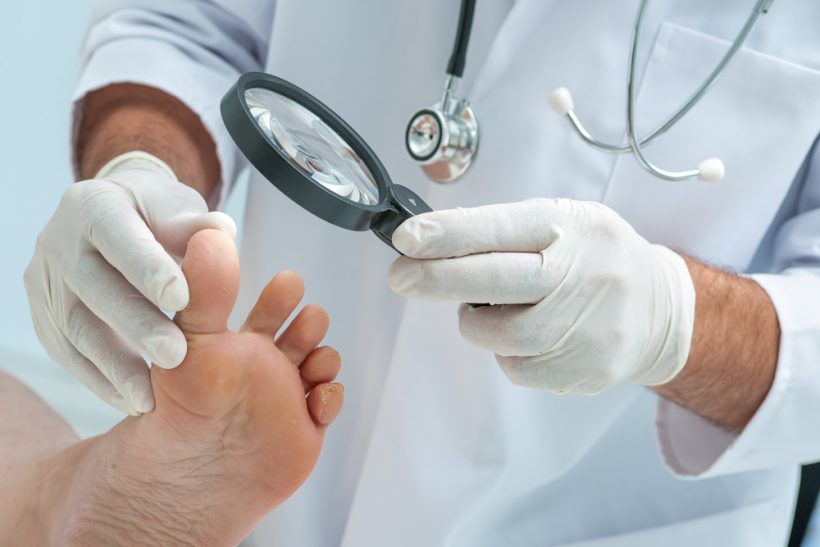 Toenail fungus, also known as onychomycosis, is a common condition that many people suffer from. They are caused mostly due to feet staying trapped in shoes and socks the entire time making them a breeding ground for fungi and bacteria. Fungal infection in the toenail can also be caused by coming into contact with infected people or things, such as the tools used in manicure and pedicure, or using publicly-shared spaces such as showers in lockers.

Although, people might not even be aware of being affected by toenail fungus, it is recommended that pain, discomfort, crumbing of the nails, or unsightly yellow spots appearing on the nail bed should be checked immediately and treated, in order to keep further complications at bay.

Fungus of any kind grow and thrive in moist and warm environments. Toenail fungus gets this particular environment in plenty as the feet are generally covered in socks and shoes throughout the day, making it difficult for them to breathe and thus stay clean of sweat. Toenail fungus is essentially, an overgrowth of fungus on toenails where the fungus feeds off the proteins in the nails, keratin.

They breed and grow in dark, damp places and their presence render the distinct foul smell in the feet, that people suffering from toenail fungus often experience. As mentioned earlier, toenail fungus is contagious, but that is if you come into direct contact with the infection, such as sharing the socks or shoes of the affected person or using infected tools at the salon where you might have gone for a mani-pedi. It is also advisable to use slippers near pool areas and public showers as you might unknowingly come into contact with areas which might have been infected by the person using them earlier.

How to Spot Toenail Fungus?

You will know you have toenail fungus if you identify the following signs:

How Dangerous Is Toenail Fungus?

Most people don’t consider toenail fungus as a serious condition and believe it will heal or go away on its own. Certainly, with issues like diabetes and heart conditions, a bit of yellow nail seems too trivial a matter to pay much attention to. However, people with chronic ailments such as diabetes and vasculitis are at an elevated level of risk when it comes to infection due to toenail fungus. Also, people with low immunity or immunity disorders are prone to facing the severe effects of toenail fungus that can turn out to be dangerous.

When left unattended, toenail fungus can spread to the adjacent toenails and even spread to the feet and further, causing problems such as athlete’s foot and jock’s itch. Since a fungal infection can grow rather quickly, care much be taken to see that the affected area is kept clean and dry and ensure there are no cuts and cracks in or near the affected toenail. However, if the toenail fungus does manage to slip through a crack or cut in the feet, it might start affecting the skin and lead to a condition known as cellulitis. Cellulitis is identified by the appearance of swollen, red patches of skin which are warm to touch and are generally painful. It should typically be treated as soon as it is identified, as it can spread extremely fast and also start appearing on the arms and face. If left untreated, the bacteria causing cellulitis might end up entering the lymph nodes and bloodstream and might turn into a life-threatening situation in no time. 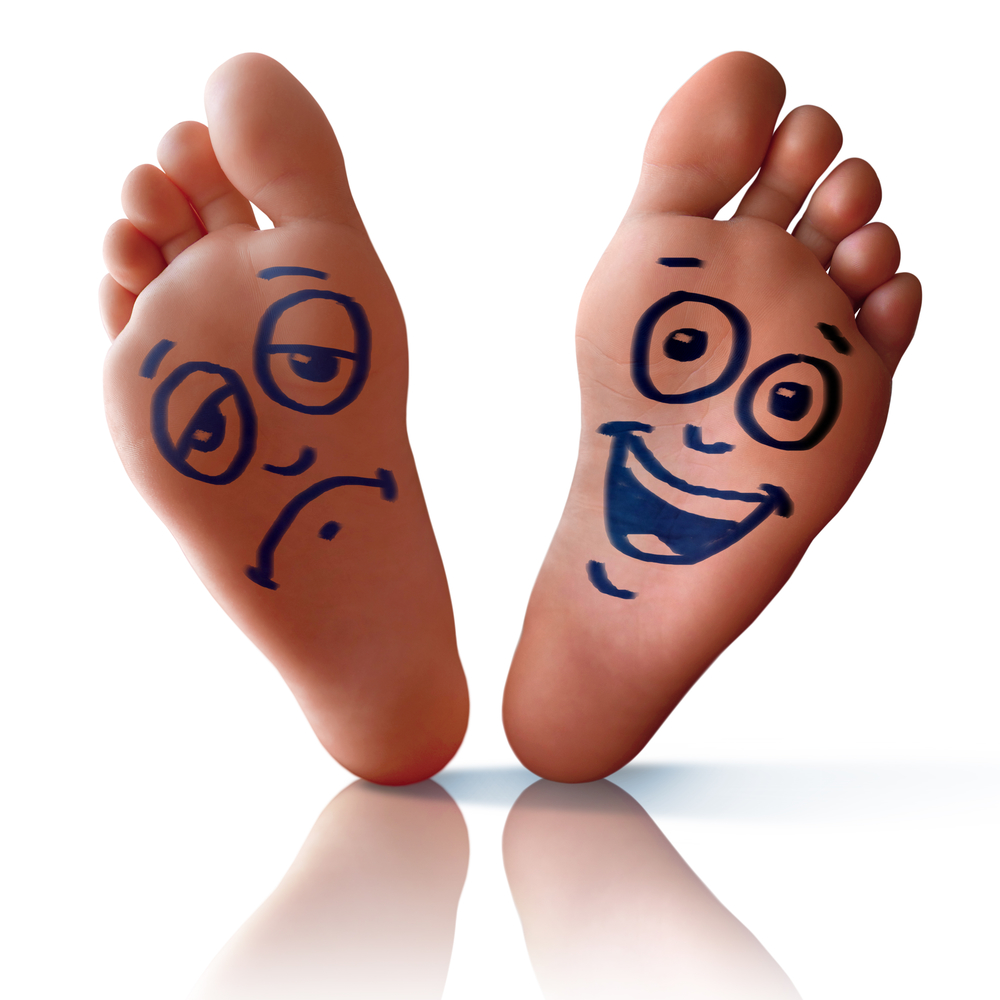 How to Fix Toenail Fungus?

Toenail fungus should be treated as soon as it is spotted, or else it might start spreading to your adjacent toenails, feet, and might even infect people with whom you come in close contact with.

Treating toenail fungus which is in a mild stage is not a difficult matter. There are a number of home remedies which can help you in ridding yourself of this annoying ailment, starting with tea tree oil or oregano oil. Both these essential oils are easy to source and use. Their antifungal and antibacterial properties make them an excellent choice to battle toenail fungus. You can apply either tea tree oil or oregano oil onto the nail bed with a cotton swab, before going to bed at night. Continuous application for 8-12 weeks should fetch positive results in cases of mild toenail fungal infection.

Among other home remedies used to fight toenail fungus is the household bleach. Bleach contains 3% – 6% NaOCl (sodium hypochlorite) which is a chemical known to effectively fight bacteria, fungus, and virus, and is often used as a cleaning agent in homes, hospitals, malls, and restaurants. However, when using bleach as a treatment for toenail fungus, care must be taken to see that the instructions are followed as closely as possible, as prolonged exposure to bleach could be harmful for the surrounding skin and might lead to reddening and rashes.

In order to use bleach to rid yourself of toenail fungus, you have to mix one cup of household bleach to ten cups of warm water and stir well. You will the need to soak the affected toes in the mixture for no more than 3 minutes. You should repeat this treatment twice every week, with a three-day gap between each treatment. For cases of mild infection, you should start seeing results in 2-3 months.

For more severe cases, it will take a bit longer to show results, but should work nonetheless. However, if you feel the infection has taken a turn for worse and is showing symptoms that are somewhere between moderate to severe, it is recommended you see a doctor who will prescribe you some oral (itraconazole and terbinafine) or topical medications (efinaconazole and tavaborole) to speed up the process of recovery. Oral medications for treating fungal infections can affect liver function by irritating the liver walls. It is advisable to go for liver function tests before starting with the oral medicines and undergoing tests once again after 4-6 weeks of taking medication to see if the liver enzyme levels are elevated, at which stage, the doctor might ask you to discontinue oral medication for some time and prescribe some topical ointments, till the liver heals.

Topical ointments work well, though they might need more time to heal more severe cases. For topical ointments to work well, you will need to file off the nail bed a little, with an emery board, and then apply the ointment, which usually comes in a bottle with a little brush, much like a nail paint with its brush applicator. It is easy to apply and maintain.

The Funginix Toenail Fungus Treatment is a maximum strength anti-fungal nail solution which has proven to be beneficial in cases of severe toenail fungal infection, as well. The solution has an active ingredient undecylenic acid which along with a concoction of solutions and oils is known to fight fungal infections, aggressively. The Funginix Toenail Fungus Treatment contains the most comprehensive mix of ingredients among all other toenail fungus treating solutions. Apart from undecylenic acid and other chemical solutions, it includes a healthy mix of the following organic oils and ingredients:

Since toenail fungus has the ability of relapsing and if left untreated for long it might actually lead to serious complications, it is always preferable to see a doctor. However, if you would like some over the counter topical medication to begin with, then the Funginix Toenail Fungus treatment might be helpful in alleviating the pain and appearance of yellow toenails.

Toenail fungus in itself might seem like a minor issue as it can be treated easily, provided it is spotted soon and a treatment plan is developed in a timely manner. However, if you are reading this article at the time when you are suspecting a case of toenail fungus or have been dealing with one for a long time now, you can start trying out with the home remedies but at the same time it is preferable to consult a doctor just to be sure. Toenail fungus is caused by parasitic fungi, which are essentially feeding off your body in a way. The presence of any kind of virus, bacteria, or fungi in the body is clearly discouraged as they might lead to various health issues and complications in the long run. These tend to attack people with chronic ailments more severely, so you should be mindful about treating it at the earliest.